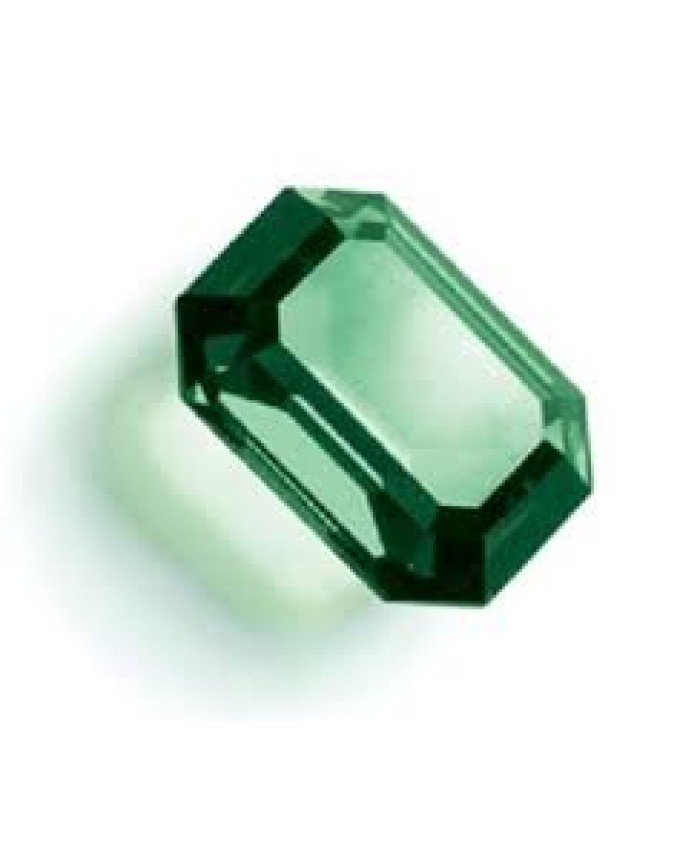 Introduction: People of almost every part of the world are acquainted with the gem 'Emerald'. It is called by many names according to the places it is found at and the languages. It is a very attractive gem found in mines. It belongs to Aquamarine class of stones found in mines and is a combination of aluminum, sand, beryllium and oxygen. Aquamarine is also a stone and looks like emerald to a great extent. A high quality emerald is deep in colour and is attractive. Emerald is found in light and moss colours also. Elements of alkaline property such as lithium, sodium, potassium etc. are also found in emerald.
It increases intelligence and brain power, removes and cures fickle mindedness, loss of memory, stammering, haish spirit, fear from spirit, but reduces passions and sexual desire.

Use of the gem:  It should be worn in little finger of right hand in gold and the weight should be 3-7 carat and should be worn on Wednesday after having bath, washing the ring or locket with raw milk and worshiping with Dhoopa, Deipa, flowers and Akshata with contemplation of Mercury or Lakshmi having been north facing with the recitation of the following Mantra.

Emeralds are ruled by Mercury. Those who have Mercury as lord of an auspicious house in their birth chart may find emeralds beneficial. If Mercury is in an inauspicious house or is aspected by a malefic planet, it may also be advisable to wear emeralds, but its use in this case should be prescribed by a qualified astrologer. Emeralds can be useful for those under the influence of Gemini or Virgo.

Flaws in an emerald can interfere with the transmission of Mercury’s cosmic force, so flawed emeralds should not be used. Green is the cosmic color emeralds enhance, and the cosmic number is five.The best emeralds are smooth, brilliant, transparent, radiant, free of spots, have a rich even color, appear to glow, and have no bad internal or external flaws. They should also be well cut. An emerald should reflect a good light that shines like lightning.

An emerald that does not show glow, appears transparent in the center, or has a lighter tone, is not a first-class stone. An emerald is also considered inferior if it is too dark. An emerald’s weaknesses: cracks, rough surface, thick water marks, depressions, no luster, brittleness, more than one color tint, a blackish tinge and a dirty appearance. If the gem is bright like mica, do not purchase it. Do not wear a mixed-colored emerald.

A good emerald without defects will bring wealth, good health, property, and increase a person’s intelligence. Emeralds help increase memory, which has the effect of also improving the wearer’s education and psychic abilities. Emeralds protect against snakebite, envious people, evil spirits, and curses. They give good children, and pregnant women who wear emeralds are ensured a safe and painless delivery. Emeralds give energy and balance, calm the mind, give mental peace, and help meditation. Emeralds help their wearers practice chastity. They also help the wearers do well on exams, to not lose money in business, to be honest, and to have a good reputation. Wearers can formulate good ideas and will possess the strength to enact them.

Emeralds should be set in gold on a Wednesday. They can also be set on Fridays or Saturdays. The gemstone should not weigh less than one carat, but three carats is recommended. The best sizes are three, five, seven, or ten carats. The proper rituals should be performed, and the following mantra chanted 108 times: Om bum budhaya namah om. An installed emerald ring should be worn on the little finger of the right hand within one or two hours after sunrise on a Wednesday of the bright half of the lunar month. The ring should be made when Mercury is in Virgo.

Astrogems offers Emerald at affordable rate so hurry up and buy now Emerald.